The Five Practices of Smart Teams 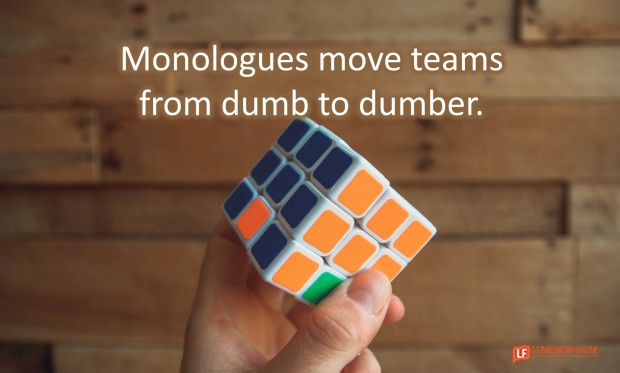 The 5 practices of smart teams:

Smart teams don’t have dominant leaders. The lid of a team’s intelligence is the dominant person who controls the team.

I heard an ineffective leader say, “I never hold a meeting until I’m sure of the outcome.” That leader has a stupid team.

It doesn’t matter how smart the individual players are if meetings are scripted.

Tip: Get heads turning toward each other, not the head of the table.

Smart teammates say, “Something seems to be bothering you,” when a fellow team member isn’t them self.

Strong connection is the foundation for vigorous debate. (See behavior #3.)

Smart teams ask, “What if?”

Teams get smarter when the people around the table speak freely.

Expect equal participation from every member, on average.

Smart teams may not be soft, but they are safe.

Have you been on a smart team? What made it smart?

Patrick Lencioni, “The Five Dysfunctions of a Team.”

How to Avoid Distraction and Focus on Real Issues

8 thoughts on “The Five Practices of Smart Teams”